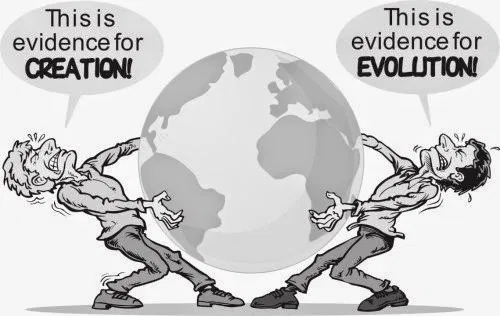 The origins debate is a recurring cultural, political, and theological dispute about the origins of the Earth, life, humanity, and the universe. Is there an approach to the debate that can be accepted by scientists and theologists?

The dispute continues between those who espouse religious belief and thus support a creationist view, and those who accept that purely materialistic scientific theories explain, or in time will explain, all aspects of the origins of the universe, life, and humans.

Creationism is the religious belief that the universe and living organisms originated from specific acts of divine creation. It includes a continuum of views on scripture and science. On scripture, perspectives range from a literal to a figurative interpretation of Genesis. On science, views vary in their acceptance or rejection of scientific explanations, such as evolution, and measurement techniques, such as radioactive decay for estimating the age of fossils.

In America, the general public remains divided on the origins debate. A 2019 Gallup poll indicated 40% of adult Americans hold that God created humans in their present form, 33% hold that humans evolved, with God guiding the process, and 22% believe that humans evolved with God playing no part in it.

Creationists have made many attempts to formulate arguments that scientists can accept, so as to work towards a resolution. Early on, scientific creationists failed to show that their arguments held up to scientific scrutiny. Today, the intelligent design movement argues from scientific principles that certain events in the development of the universe and life required an intelligence in order to happen. But the scientific community does not agree that intelligent design is “scientific,” because the creator can be made to do anything, so the theory does not predict anything specific and thus cannot be tested.

The scientific community’s reaction to intelligent design makes it clear that progress in the debate requires creationism to be backed up by an approach that is testable and thus acceptable as “scientific.” This approach must therefore include explanations and predictions of aspects of the natural world that can be repeatedly tested and verified, in accordance with the scientific method.

Can the creationism argument be made scientifically testable? Yes, by checking the record that the Creator left behind, a set of documents that can be analyzed and put to the test. God, as the designer of the universe, left behind just such a record—the books of the Bible. Even if one does not hold that the record is divine, it is a fact, nonetheless, that it precedes all modern science and origins explanations. If this record (1) is detailed enough to explain the origins of the universe and life, (2) does this in a way that does not contradict clear scientific facts yet adds to the natural explanation precisely where science struggles, and (3) contains information unknown to scientists that can be verified in the future by experiment and/or observation, then it fits scientists’ need for a “testable theory.”