Religion Met Science: In the presidential election, the two didn’t get along. But should they have?

Do you believe that evolution should be taught in public schools, and that it should be presented as the only explanation for how the species arose?  Based on statements made in the past few years by President Obama and Republican nominee Mitt Romney, it appears they both would answer “yes.”

However, Romney’s fellow Republicans don’t all agree. For example, Republican Congressman Paul Broun from Georgia recently announced that evolution, embryology, and the Big Bang theory are “lies straight from the pit of hell.”

Furthermore, Romney may have recently changed his mind since in the first presidential debate he stated, “We’re all children of the same God” — in stark contradiction to evolutionists’ conclusion!

Meanwhile, only 15 percent of the US population believes in naturalistic evolution as the explanation for our origins!

And while the Catholic Church has stopped arguing against scientific findings such as the age of the universe or when life first appeared, it holds that whatever happened was guided in some way by God; in agreement with nearly half of Americans.

For the past couple hundred years, the creation-evolution conflict has been a recurring point of contention in the United States, from the presidential election to what should be taught in schools. American science legend Carl Sagan tried to settle this conflict by calling both camps “non-overlapping magisterial” – in other words, science and religion each preside as the source of wisdom over separate domains.

However, most of us feel that Sagan’s explanation is not right. In fact, it turns out that a significant portion of Americans believe science and religion can coexist when it comes to explaining our origins.

Today science tells us that the universe is 13.7 billion years old and the earth 4.5 billion years old; seemingly in contradiction to the biblical creation timeline of six days, less than 6,000 years ago.

It turns out that the Scriptures contain the scale — it has been found: 1 creation day is 1,000 X 365 X 7,000 or 2.5 billion years. That’s right, the scale is really simple, it’s been there all along,  and when you apply it to events in Genesis, it converts 19 events to the time we measure in science.

What do we get after converting these events? Agreement within measurement error; very old Scriptures contain the times for key events relating to the development of the universe and the appearance of life on Earth that science has only recently uncovered.

Check out The Genesis One Code, reread the biblical blueprint and shed new light on the 200-year-old origins argument in politics, education… 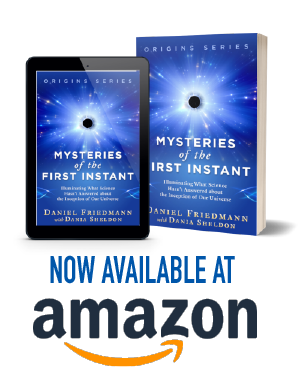